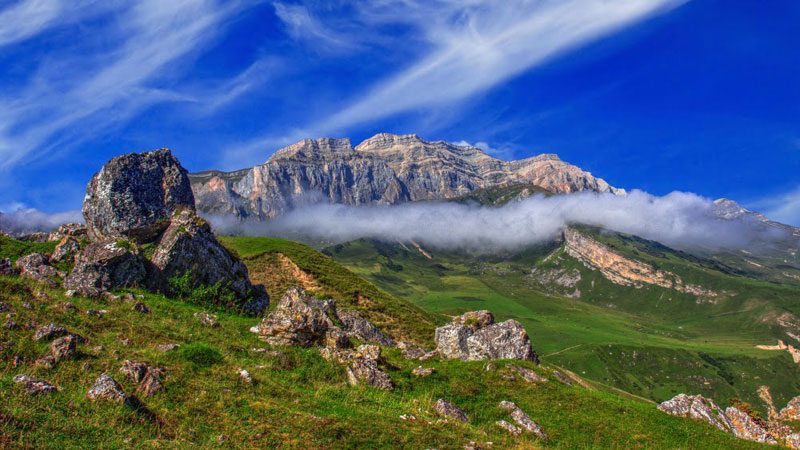 09:30. Departure from Baku to Gusar. Stop near Beshbarmag Mountain. On the way to Gusar you will see: arched bridge across Gudiyalchay river, Red Village in Guba district where one of the largest communities of Mountain Jews in the world is currently residing.

Gusar city is the last major settlement in the north part of Azerbaijan. It is called “The North Gates” due to its geographical location as it borders with the Republic of Dagestan of the Russian Federation.  Population of the region consists of Lezgins – an original nationality, with a rich culture, characterized by hospitality.

Four of the nine existing climatic zones are found in the territory of Gusar. Region is famous for Summer-Winter touristic complex – Shahdag, operating all year round. In winter it is a popular ski resort, and in summer – a camp site in the slope of the Greater Caucasus Mountains.

There is an ancient village Laza, famous for its majestic waterfalls, situated not far from the Shahdag Complex. During winter season most of the waterfalls are freezing & government organize climbing competitions on the frozen waterfalls.

Part of the Gusar territory is included to the Shahdag National Park – the largest in Azerbaijan, covering the area of seven districts!

There are a lot of historical monuments on the territory of the region: referred to the XIII century remains of the fortress’s walls in the village of Enih, the tomb, built in 1544 over the grave of Sheikh Ardabil Juneyd, referred to the XVIII century rural mosques Kohne Khudat & Khuray.

Cultural life of this region is very rich. There are a lot of musical collectives, the most popular is the folklore ensemble called “Lezginka”. “Lezginka” is a popular national dance in the entire Caucasus, performed accompanied by accordion and national percussion instrument – “nagara”.

Laza village is located on the north-east outskirts of the Main Caucasian Ridge, at the foot of the high plateau “Shah Yaylag” and one of the highest peak of “Shahdag” – its height is 4242 m above sea level. Laza is situated in a mountain basin at an altitude of 1300 m above sea level, on the ancient caravan route passing through the Main Caucasian Ridge (Kurve Pass), leading to the South-West and North-Western spurs of the Greater Caucasus.

Population of Laza mostly consists of ethnic Lezgins, whose history is closely connected with the Caucasian Albania, one of the most ancient states in the territory of Azerbaijan.